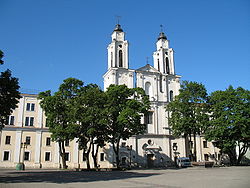 Kaunas St. Francis Xavier (Jesuit) Church Rectorate (hereinafter – the Rectorate), in collaboration with UAB ProBaltic Consulting, has successfully developed and implemented the project financed under the Cultural and Natural Heritage Management and Repairs Programme aimed at restoration and preservation of the cultural heritage building (the church).

The cultural heritage site, having sacral architecture in late baroque style, Kaunas St. Francis Xavier (Jesuit) Church, is distinct for its first towers tapering to the top and divided into openings, it is oriented toward north-south in a non-traditional way and furnished with the valuable great altar adorned with multicolour artificial marble. Church has an architectural and historical cultural value. It is a part of architectural ensemble, typical to the Jesuits worldwide, which consists of the monastery, church, Kaunas Jesuit Gymnasium (former College), and the House of Thunder situated in one quarter. Polychrome painting fragments on the north facade are of particular value. The church is located in the main square of Kaunas – the Town Hall Square, thus, its restoration will have a direct impact not only on the local community, but also tourism.

Under the project, there were carried out regulative heritage protection works in Kaunas St. Francis Xavier (Jesuit) Church according to the Church Regulation Project”; following the heritage protection requirements, the church’s towers and facade of the late Baroque, a total of 3,460 sq.m, were repaired. In order to improve society’s attitude and understanding of the cultural heritage, to raise its significance and worth, to preserve and pass it on to future generations, the project involved various training: a course of lectures for the general public, introductory meetings and workshops for cultural heritage specialists (real cultural heritage restorers, architects).

The reconstructed building will be used to arrange cultural events and educational activities for the local community, to implement religious, health and recreation tasks important for locals and uniting the community. The repaired towers and facade of the church will significantly improve the image of the central square of the city and will become a tourist attraction. While attracting tourists to the area, the restored building will create economic benefits for the local community.

No comments to show.